With the escalation of the Siachen operations in 1984, Contingency plans were developed to utilise high performance fighter aircraft from Leh airfield as and when needed.  Air Marshal A D Joshi narrates the first landing of the MiG-23BN at Leh airport - The planning and training for this event was no simple matter, as this narration will make it evident.

Ever since flying operations commenced at Leh in Ladakh , it has been the base for transport and helicopter operations only. Fighter operations could not be undertaken due to various limitations on the aircraft , as Leh is situated at a fairly high altitude. Even the British Harrier trials planned in 1973 could not be undertaken due to various problems and confidence levels of the British test pilots.

In April 1984 when Siachen operations commenced, the Army was in need of fighter support if the situation warranted it. The Air Force decided on deploying the Hunter aircraft initially, however because of weapon limitations that the Hunter aircraft could carry, it was decided to utilize the Mig-23 variable wing sweep, supersonic fighter bomber.

On 4th April 1984, No. 221 Squadron AF, was operationally deployed at Pathankot, standing by for operations. The squadron was equipped with the MiG-23 BN fighter bomber aircraft. The MiG-23 BN was capable of reaching the target area from Pathankot itself, with the maximum load. The only factor that needed to be considered was the flying time that it would take to reach the target area.

While at Pathankot extensive valley flying training was undertaken under my guidance, then a Squadron Leader, senior flight commander and offg commanding officer of the unit. Dummy attacks on possible targets in the valley as well as on mountain tops were practiced.

Practice diversion sorties were flown to Leh, so as to get used to the terrain and circuit pattern.  The approach to land at Leh was only for Runway – 07. Two types of approaches were possible . One was a direct approach from Khalsi and the other was a standard circuit descending on down wind and base leg like the transport aircraft. The circuit for R/W 07 was behind the mountain range and approach was along the slope of the mountain. The airfield could not be seen on down wind and base leg and became visible just prior to rolling out on finals. The approach all along was just 50 meters above the slope and there was a big hump just after the Indus river and short of the 07 dumbbell, and lot of care had to be taken when doing an overshoot after round off, as the engine response and speed build up was slow.

Since there was a big hill feature at the other end of the runway a turn had to be executed to the right, so as to fly along the Indus in a south easterly direction to build speed and height. 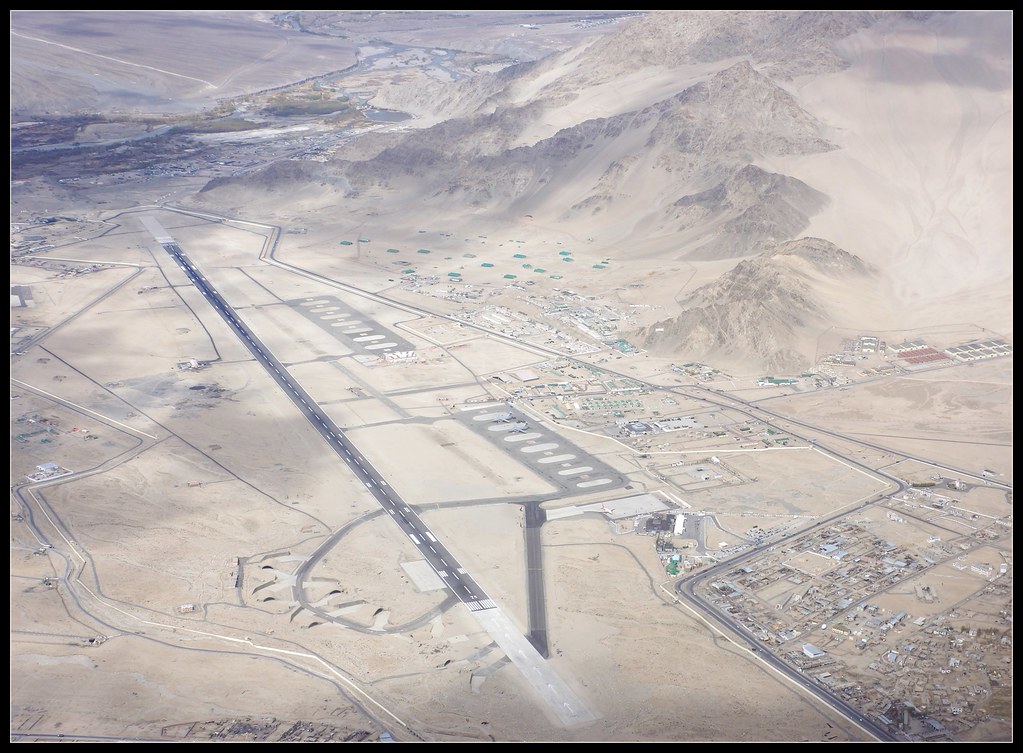 An aerial view of Leh airfield. The runway 25 is closest to the bottom of photo. The Author would have made his approach along the valley on the top and landed on Runway 07 at the top left of the photo. -Photo - Courtesy of  India Nature/Flickr

On 15 May 1984 on instructions from HQ WAC, I along with two aircraft ferried back to Halwara. Technicians from the Base Repair Depot (BRD) were to carry out some trials on the turbo starter which started the main engine.  A .1mm jet was fitted to the fuel pipe line to reduce the fuel inlet into the turbo starter. The squadron was still not aware as to why this mod was being carried out. After various trials, on 16th May, the aircraft were ferried back to Pathankot.

On 18th May on instructions from WAC, I led a detachment of three aircraft to Awantipur . At Awantipur some more trials were carried out on the turbo starter and finally .6mmjet was fitted. Simultaneously ground crew was moved to Leh.

The SASO WAC Air Mshl Raghavendran visited Awantipur on 22nd May along with AOC J&K AVM Arvind Dalaya .  It was then that I was asked to land the MiG-23BN at Leh. I was given to understand that our own test pilots were not too confident about the aircrafts operational utilization from Leh.

On 23 May1984 at 10:00 hrs I was escorted by my no 2 Sqn Ldr Paul and 2 Mig 23 MFs ,as a single fighter aircraft is prohibited from flying over the mountains and my no 2 was to return to Awantipur. My aircraft (SM-245) configuration was clean with only internal fuel. The unit had already calculated the all up weight of the aircraft required for a safe landing at Leh. Based on temperature and pressure the (Touchdown Air Speed) TAS was calculated. The permissible hub speed for the undercarriage of the aircraft was 320 kms for the main wheels and 280kms for the nose wheel. The altitude of Leh being 3256 mtrs , the true airspeed at touchdown was approx 60 kms more than the IAS (Indicated Air Speed) . The tail chute limitations of less than 280kms was another factor that had to be kept in mind. Therefore , it was necessary to keep the aircraft floating for as long as possible ,so as to ensure that the touchdown TAS would be less than 320kms and the nose wheel lowering as well as the tail chute deployment would be less than 280kms.

On reaching overhead Leh , the other three aircraft detached and were orbiting overhead. I carried out practice circuits and over shoots so as to bring the fuel state to a figure as low as possible. When the fuel state reached 550 liters, I decided to land the aircraft as the fuel available did not permit another circuit. If I had failed to land the aircraft, it would result in an ejection due to lack of fuel.

After announcing my intention to land, there were calls of ”best of luck “ from my airborne buddies as well as the ground based personnel ( ATC and Tpt aircraft ). I carried out my descending circuit as precisely as possible, turned onto base leg , and just before roll out made contact with the runway. The approach was made on Radio Altimeter maintaining 50 mtrs all along the slope, adjusting the height speed combination.

I was aware that on crossing the Indus River short of the runway there would be light turbulence, erratic winds, speed fluctuations, as well as a mild sink. There was also a big hump in line with the runway, short of the dumb-bell which gave the feeling that the main wheels would touch it.

The speed on threshold was 280 kms IAS, round off was on the dumbbell. I reduced the throttle gently, allowed the aircraft to float and touched down at a speed of 240 km IAS. Things moved in a flash and at a speed of 220 km IAS, I lowered the nose wheel and deployed the chute. The aircraft rolled till the the end of the runway under control.

R/T NATTER OF “CONGRATULATIONS JOE “came from one and all including the IAC captain . I turned right into the taxy way leading to the blast pen at the end of R/W 07. I jettisoned the tail chute, stopped the aircraft, switched off and then gradually depressurized the cockpit as sudden decompression could cause problems.

Gp Capt S K Behal , the officiating COO for fighter operations was present to receive me. I was taken to the ops room and made to speak to Air Mshl Wollen the AOC-in-C WAC who extended his congratulations and asked a lot of questions.

The Author, then Squadron Leader A D Joshi with his MiG-23 BN after landing at Leh airfield

I then carried out a recce of the runway and gauged that the down slope from dumbbell 25 to 07 was fairly steep, and there was no arrester barrier at the 07 end, therefore aborting take off meant going off the runway hitting the hump and then going over into the Indus river. In case one decided to eject, the minimum height required was 30 meters and speed above 130 kms.

I then carried out start up and taxy trials . The trials completed, the aircraft was made ready for takeoff and return to Awantipur. However bad weather set in and flying was called off for the day .

I was elated at the fact that I had created history . As per rules , an overnight stay meant rest for 48 hrs , however on instructions from WAC the restriction was waived and if I was found fit the next day I was to take off.

On 24 May 84, after a thorough medical examination I planned my take off . Once the three aircraft from Awantipur came over head Leh, I started up the aircraft which posed no problems , Oil pressure had to be adjusted to remain within limits ,I then lined up on R/W 25. Take off was also a little awkward as 300mts up the runway it slopes away and therefore the controls initially have to be eased forward to prevent premature liftoff and on crossing the hump then eased back to lift the nose wheel. This is to be done gently as the gap between the tail fin and runway surface is very little and chances of it touching is runway are bright.

At a speed of 130 km IAS, I raised the nose wheel as I had crossed the hump and unstuck at 290 km IAS short of middle marker. This worked out to a speed of 352 km TAS which was way above the 320 kms restriction on the hub.

The flight to Awantipur was uneventful and on landing was received and congratulated by the SASO and other station personnel.

Three more trial landings and take off’s with various loads were carried out before full flying operations on the Mig 23 BN’s was cleared for other fully ops pilots. This was certainly a red letter day for me personally and the Air Force .

A few months later in September, Sqn Ldr Joshi (Right) along with the SFSO Wg Cdr Shirazi and Flt Lt Muralidharan at Leh.

During my tenure as CO of the same unit from April 85 to May 87 the squadron carried regular operations at Leh. I was also tasked to carry out range trials at Toshe Maidan near Srinagar , Dummy dives at camp 6 on the Siachen Glacier . Since it was dangerous to carry out full range work on the glacier, based on my recommendation Kar Tso was opened as a regular range after I had carried out trials of all weapons ( guns ,rockets & bombs ).

I was then given the task of briefing Mig 21 Bis and Mig27 sqns. Besides this, approaches were carried out by me at Thoise, and a number of Photo recee sorties were personally under taken by me and some unit pilots. It has certainly given me great satisfaction for being the first pilot to start operations from Leh as even the Soviets had not operated at such heights and possibly the most experienced fighter pilot to fly in this area.

This photo of the MiG-23BN at Leh Airfield, as well as the painting of Air Marshal A D Joshi are on display at the Leh War Museum.

Air Marshal A D Joshi (10886 F(P))was commissioned in the IAF in June 1967, as part of the 97th Pilot's Course. In his service spanning over 39 years, he commanded No.221 Squadron flying the MiG-23BN, and was the C-in-C for Eastern Air Command and Strategic Forces Command. He is a recipient of the PVSM and VM.